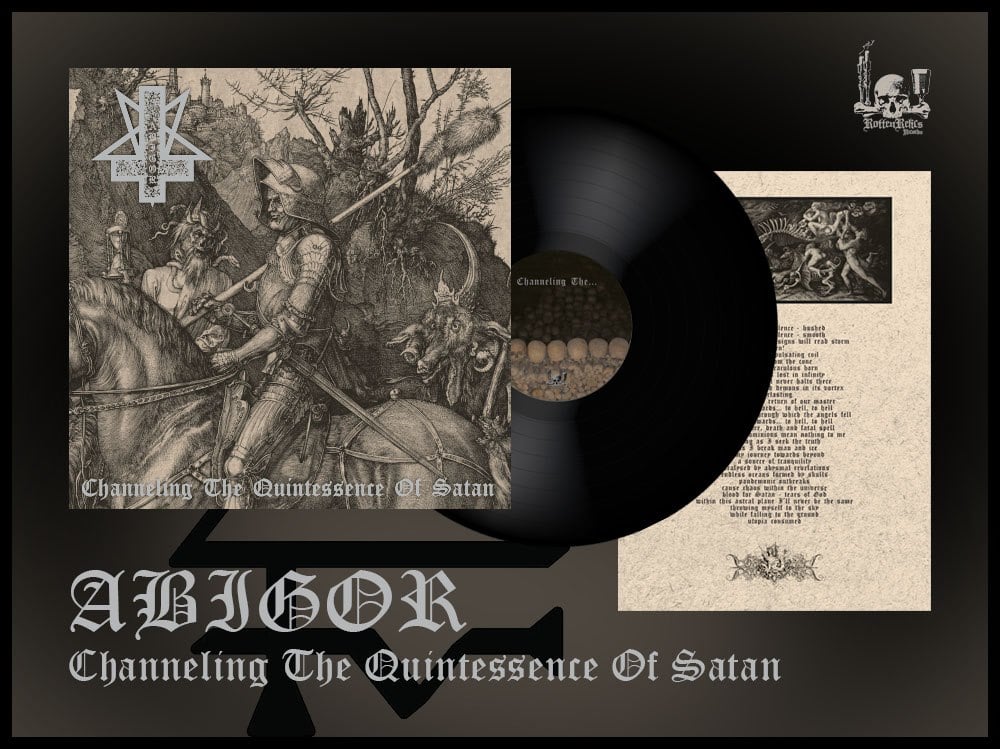 CHANNELING THE QUINTESSENCE OF SATAN LP out by the end of the month.

Coming in the shadow of the new album, local sonic terrorists Rotten Relics have long prepared the first time vinyl release of Channeling The Quintessence Of Satan in its original version.

For some years, we strictly said no to a reissue, since that album marked the beginning of the end, and somehow its fate was cursed. Silenius quit in the studio during the recordings, TT followed after its release, PK kept things running for a while but ultimately, it lead to the slumber that followed.
Channeling has its flaws and we do not consider it as part of the main ABIGOR canon, which is representd in the Hörnix 6xLP box, featuring the trinity PK, Silenius, TT just as today.

Still, some of the best riffs we did in the 90s are found here. „Dawn Of Human Dust“ is a real ABIGOR classic, especially in the version with new vocals and bass (first on CD by End All Life, more recently as AV999 LP on Avantgarde).

Over the years we realised the album is is valued by some die-hards. It is part of some people´s personal history and closely connected to a moment frozen in time mercilessly. But music has the power to revive and bring back those days vividly.

Rotten Relics have pesterd ours ears long enough until we agreed and said ok, then for f**s sake they can do it! We pay tribute to these people. And the lacquer cut sounds killer, even the sick „Pandora´s Miasmic Breath“ pierces through the spakers like poison arrows, so the decision was right.
It will be a strictly limited one-time release with 375 numbered copies on sale and never to be issued on vinyl again. It is made STRICTLY for those to whom this album means something.

For sale in the Rotten Relics webshop by the end of the month.

We do not endorse any discogs flippers! If you want to order more than one LP with some local friends, we will only agree if such combined order is verifiable. No „rarity collectors“ and golddiggers allowed. From maniacs for maniacs!