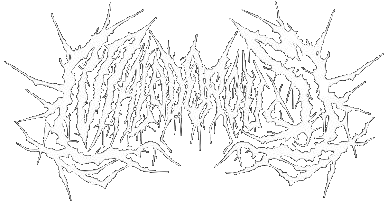 Traditionally an internet band that was founded between two American members: Chase Martin (from Georgia) and Mike O'Hara (from New York). The group now currently consists of three members that reside within both the USA and the UK.

A fake EP that is titled "Amaranthine Redolence" (the same name as the band's debut album) is available on the web but it never existed, at least not in any officially released form. The cover art used for it was an early proposal for the full-length cover that was eventually dropped.

Cameron "Big Chocolate" Argon was only in Malodorous for a very short time. The only involvement he ever had with the group was that he performed guest vocals for one song for the band's debut album Amaranthine Redolence and he recorded vocals to a non-album track entitled "The Carrion Recoil."

The Carrion Recoil is also the title of a second Malodorous album that was never released due to it never being finished.